I am committed to teaching engaging courses with activities, lectures and assessments that are based on learning objectives. My lessons are focused around not only understanding a topic, but utilizing novel tools and hands-on learning so students can learn new skills in the process.

To continue my development as a teacher, I recently completed the UC Davis 'Seminar on College Teaching' and I have been accepted as a 2014 Fellow of the Professors for the Future Program at UC Davis, where I will lead a project to teach graduate students how to write a press release and get their research covered by the media. 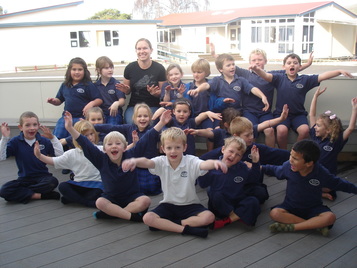 Outreach is one of the most rewarding parts of doing research, and see it as an important component of my commitment to conservation.

In my role as the Programme Manager at the Marlborough Falcon Trust, I developed and lead education programs, along with the Department of Conservation, at local primary schools, secondary schools, and for community groups. I also started the 'Falcon Ambassadors' programme for primary school children with a keen interest in falcons to get to be involved in advocacy activities. Two of the ambassadors in this programme were even featured on national television when they gave a presentation to their class about falcons, and one completed a science fair project about falcons that won three regional awards, including a gold medal.

To help spread the word about the rewards and stumbling blocks that I've encountered through doing outreach, I will be giving an oral presentation entitled: Kiwis Love Falcons: A case-study of successful community conservation at the upcoming 2014 North America Congress for Conservation Biology (NACCB) in Missoula, Montana, July 13-16.

I am a member-at-large on the executive committee of the Bird Education Alliance for Conservation, a group that helps connect and communicate with professionals working in avian conservation fields about methods and pedagogy surrounding environmental education initiatives.