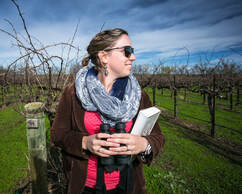 I am a conservation biologist interested in human-modified landscapes, ecosystem services, human-wildlife conflicts, predator-prey dynamics, and ecotoxicology. My work has largely focused on the interactions between birds and people in cities and on farms, but I have also worked on mammals, invertebrates, and on understanding people's perceptions of wildlife. I am currently a Senior Lecturer in Terrestrial Ecology at Te Whare Wānanga o Waitaha| The University of Canterbury, where I lead the Kross Conservation Lab, teach courses, and mentor students. 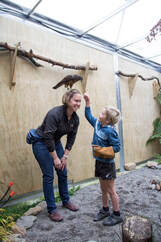 Sara's PhD research focused on the efficacy of reintroducing the threatened Kārearea/New Zealand falcon (Falco novaeseelandiae) into the vineyards of Marlborough, New Zealand's largest wine growing region as both a conservation scheme and as a source of natural pest control for grapegrowers. This work was featured in multiple news outlets, including as an episode on New Zealand's longest-running TV Show, Country Calendar.  Dr. Kross was named a member of the University of Canterbury Inspirational Alumni in 2015.Dr. Kross was a founding member of the Malborough Falcon Conservation Trust, where she was a member of the board of trustees from 2009-2013, and served as the first programme manager.

Sara moved back to the US in 2013, as a David H. Smith Conservation Research Postdoctoral Fellow where she used field experiments, landscape ecology and economics to quantify the value of wild birds to farmers in California with Rodd Kelsey of The Nature Conservancy, Jason Townsend of Hamilton College, and John Eadie in the Department of Wildlife, Fish & Conservation Biology at UC Davis. She then worked as a postdoc wit h Roger Baldwin to construct predator-prey models with the aim of determining whether barn owls (Tyto alba) are able to control rodent pests on California farms. Dr. Kross was an Assistant Professor in the Department of Environmental Studies at California State University, Sacramento for two years before returning to NYC to join the faculty at Columbia University. In 2022, Sara and her family moved back to Aotearoa where she joined the faculty at Te Whare Wānanga o Waitaha| The University of Canterbury. Dr. Kross has two young children who started accompanying her for field work and conferences at a very early age. Her husband, Hayden, is a winemaker.