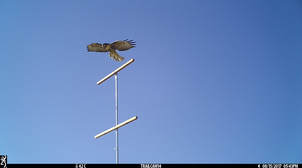 Artificial raptor perches on Western cattle ranches: testing construction and perch use.
USDA-funded project to design, construct, and install artificial raptor perches on a California ranch where, like many ranches, the soil is too rocky to dig holes to anchor poles. Twelve months of remote monitoring will determine if raptors use the perches, if they prefer specific designs, and if they use perches more in certain habitats. In collaboration with Rodd Kelsey, Andrea Craig and Scott Hardage at The Nature Conservancy, and with undergraduate students Renata Chapman and Alejandra Martinez. 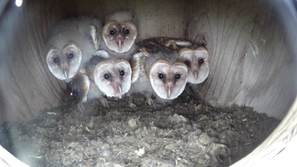 Quantifying the frequency and effects of secondary exposure to rodenticides in barn owls, with links to IPM.
This 3-year project will use ecotoxicology, foraging behavior, and breeding success data to  understand how often barn owl chicks are exposed to anticoagulant rodenticides and to quantify the physiological effects of exposure on chick growth and development. This project has been funded by a Western SARE grant from the USDA. With Emily Phillips, Ryan Bourbour, Breanna Martinico and Josh Hull at UC Davis, and with Roger Baldwin from UC Davis and UCANR. Undergraduate student Adeyemi Walker-Thomas from Sacramento State worked on this project in summer 2018.
Encouraging owl predation of rodents by erecting owl boxes: myth or potential management strategy?
Utilizing literature searches, population biology, and predator-prey modeling to determine whether barn owls are capable of controlling pest-rodent populations in West Coast vineyards and orchards. In collaboration with Roger Baldwin at UC Davis and with Elizabeth Hiroyasu and Bruce Kendall from the Bren School of Environmental Science and Management at UC Santa Barbara. This project was funded by Vertebrate Pest Control Research Advisory Committee grant.

Nest box utilization by American Kestrels in Yolo County, CA
Student project led by Jessica Schlarbaum at UC Davis and in collaboration with Josh Hull. Jessica has built and installed over 80 American Kestrel nest boxes on different farm types in Northern California, where she and a team of undergraduate interns are monitoring occupancy, nest success, chick growth, and foraging behavior. This project will provide valuable information about Kestrel populations in an area that appears to be one of their last strongholds.
Understanding the implications for transitioning from flood-irrigation to drip-irrigation in alfalfa for avian diversity, rodent- pest control services, and groundwater recharge
In collaboration with the Migratory Bird Partnership; conducting field observations with undergraduate researchers to determine if switching to buried drip irrigation has implications for biodiversity and ecosystem services. My students and I are focusing on quantifying the pest control services that carnivorous birds provide to farmers when they capture rodents during flood irrigation.

Conservation in the agricultural landscape: Investigating the tradeoffs between avian conservation and farm production in an ecosystem services framework 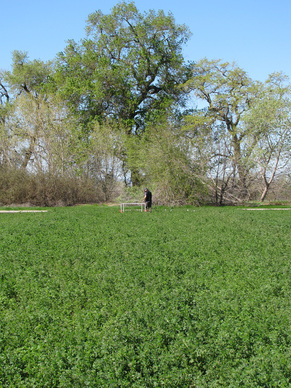 Food production for human consumption is forecast to double by 2050. In many areas of the United States farmland is virtually the only habitat available for wildlife. Agricultural lands are therefore a critical, but often overlooked, opportunity for conservation efforts. Intensification of agricultural practices has been identified as a major threat to many avian species, and conservationists advocate wildlife-friendly farming practices to offset the negative impact of farming on birds.

Importantly, some birds provide farmers with a natural form of pest control, and the loss of biodiversity due to agricultural intensification may therefore lead to an increased reliance on chemical inputs such as pesticides. The few studies that have examined pest control services by birds have shown that by consuming insect pests, some avian species can reduce insect damage to crops and increase yields. However, birds themselves can sometimes be pests by foraging on crops, and farmer efforts to drive birds from fields can compound the detrimental impact of agricultural intensification on wildlife. Farmers therefore have few tools with which to objectively assess the true impact of avian species on crop production and with which to base decisions on implementing wildlife-friendly farming practices.

I will use bird-exclusion experiments in California’s Central Valley to quantify the effect and economic impact of bird foraging on both avian and insect damage to crops. This study will consider the role of birds across multiple crop types, including alfalfa, tomatoes and sunflowers,  and will take into account factors such as landscape complexity and farming practices. This research has the potential to alter the composition of the farming landscape in the Central Valley of California, and could extend into other major breadbasket regions of the United States.

Re-introducing the New Zealand falcon to the vineyards of Marlborough 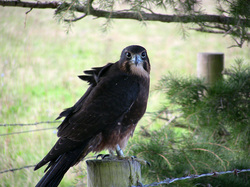 In our ever more populated world, the rapid expansion and intensification of agriculture is driving worldwide biodiversity loss, and the interactions between production landscapes and wildlife conservation are becoming increasingly important. Farming systems depend on ecosystem services such as biological control, while conservationists are calling for the establishment of conservation initiatives in non-preserve landscapes. Despite this, the goals of agriculture and the goals of predator-conservation are rarely mutual. Here, I demonstrate one of the first examples of a mutually beneficial scenario between agriculture and predator conservation. I used, as a case study, a reintroduction project that translocated individuals of the threatened New Zealand falcon (Falco novaeseelandiae) from the hills of Marlborough into vineyards, to determine if predators can survive within an agricultural landscape while simultaneously providing that landscape with biological control services.

To assess the conservation value of the falcon translocations, I used remote videography, direct observations and prey analysis to measure the behavioural changes associated with the relocation of falcons from their natural habitat in the hills and into vineyards. Falcons in vineyard nests had higher nest attendance, higher brooding rates, and higher feeding rates than falcons in hill nests. Additionally, parents in vineyard nests fed their chicks a greater amount of total prey and larger prey items compared to parents in hill nests. I also found an absence of any significant diet differences between falcons in hill and vineyard habitats, suggesting that the latter may be a suitable alternative habitat for falcons. Because reintroduced juvenile falcons were released in areas devoid of adult falcons, it was possible that they were missing essential training normally provided by their parents. I used direct observations to demonstrate that the presence of siblings had similar effects to the presence of parents on the development of juvenile behaviour, with individuals flying, hunting, and playing more often when conspecifics were present. Finally, through the use of artificial nests and remote videography, I identified that falcons nesting in vineyards are likely to suffer lower predation rates. I also found that falcons in vineyards are predated by a less dangerous suite of animals (such as hedgehogs, Erinaceus europaeus, and avian predators), than their counterparts in the hills, which are predated by more voracious species (such as stoats, Mustela erminea, and feral cats, Felis catus). The work presented in this thesis has also added to the current knowledge of New Zealand falcon breeding behaviour, prey preferences, and behavioural development.

Although agricultural regions globally are rarely associated with raptor conservation, and the ability of raptors to control the pests of agricultural crops has not been previously quantified, these results suggest that translocating New Zealand falcons into vineyards has potential for both  the conservation of this species, and for providing biological control services to agriculture